This week I plotted out a new story. What does that entail? I’m glad you asked. . .

First, I looked up a bunch of photos of Ocean Shores, Washington. Then I procured info about local festivals and restaurants and campgrounds. Then I took the pictures from my last WIP (work in progress) off of my cute little lap desk that The Hunky Hubby got me for Christmas and I made a new collage for this new story. 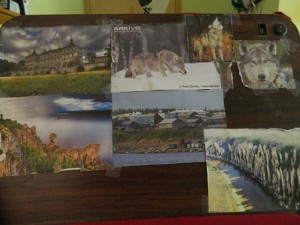 This was for my last WIP. I’ve submitted it but not heard back from my editor.

But I can’t just sit around hoping, so out with the old and in with the new. 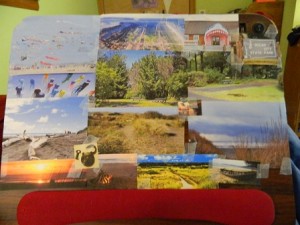 I wrote out my story question. Then I used Larry Brooks’ 6 things you need to have before you start writing and wrote out the First Plot Point (25% into story), The First Pinch Point (37%), The Mid Point (50%), The Second Pinch Point (62%), The Second Plot Point (75%), and The Climax. After that I pushed the idea out a little further by using Blake Snyder’s 15 Beats. This is where I wrote down: The Opening Image, Theme Stated, Set Up, Catalyst, Debate, Break Into Two, Fun and Games, B Story, Midpoint, Bad Guys Close In, All Is Lost, Dark Night of the Soul, Break Into Three, Finale, and the Closing Image. Obviously some of these beats overlap with the Larry Brooks model, but it helps me to grow the story. For the Finale section, I then looked to Jim Butcher’s model of a story climax. I made sure that my finale had these elements: Isolation, Confrontation, Dark Moment, Choice, Dramatic Reversal, Resolution. Then I’m ready to do my chapter outline. I made 20 chapter headings and plugged the 15 beats into that outline where I thought those story elements were likely to occur. Then I put this under each chapter heading:

The ending “Choice” is the “Goal” for the next scene. The first half of this (Goal, Conflict, Disaster) is the scene and the second half (Emotional Reaction, Review and Logic and Reason, Anticipation, Choice) is the sequel or the character dealing with what just happened in the scene. Not every chapter has both a scene and a sequel. Some chapters are just scene, some chapters have a sequel, a scene, and another sequel, some chapters are just a sequel although that is more rare for me. But the point of this is for me to plug my ideas into the right spot. If I want my character to have a Sasquatch sighting then I know that is going to be a scene. So I find that chapter where that should happen, and I put the Goal, Conflict, and Disaster (thinking she sees a Sasquatch) right there into my outline. I work on this until each chapter has at least something for me to go on. It doesn’t matter if it is in the scene section or the sequel section, but I need to have some idea of where I’m heading with that chapter. Also I want my scenes and sequels to alternate throughout the story so I make sure that happens. Once I have all my good ideas plugged in somewhere, then I’m ready to write.

Anyway, that was what I was doing last week. I am at this point. Ready to write. I will still need to do more research after my first draft so that I can include specific descriptive details to make the setting shine, but I’m ready to do a fast first draft. I intend to write my first draft during August and this is perfect because it gives me some time to set this new story aside and work for a few weeks on revising my Mexico ms. So that is what I’ll be up to next week.