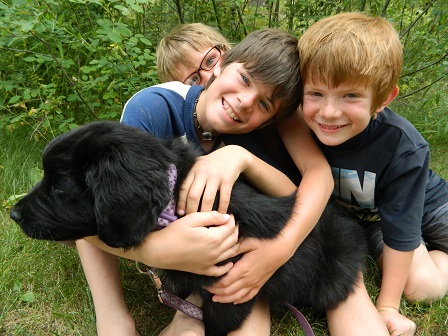 A picture of the boys and Leia from last year…here they are this year. 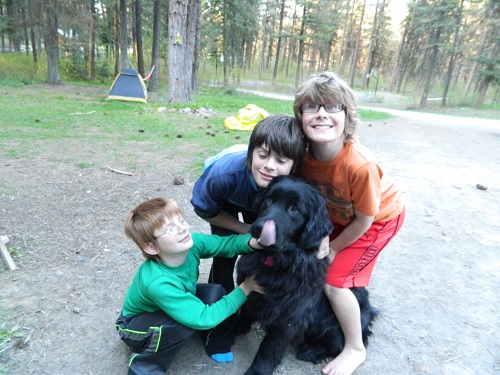 Leia–Our family needed to go to Wenatchee for several Dr. appointments and school shopping. Since the temperature was 98 degrees that day, we could not take Princess Leia Freyja along. She found ways to entertain herself at home though. She ate half a container of cinnamon rolls and box of jerky treats that she dragged down from the window sill. But it was hard to stay mad at her for long. Later when I was searching for our furry miscreant, I found her staying cool under the camp porch in a big hole she’d dug. But sitting with her in the dirt was a little boy, hiding under the porch so he could give her pats.

And an added feature this week…

So, many of you know that I have very creative nightmares. This week I was standing on a rickety iron balcony kissing The Hunky Hubby. He said some kind of snarky thing and so to express my outrage I rolled my eyes and smacked him on the chest. My impulsive actions had terrible consequences for The Hunky Hubby stepped back, wobbled against the rickety railing, and fell 20 feet to his death. Then his ghost roared up from the ground and tried to drag me to my doom. I deserved to die, he informed me. “I’m sorry that I killed you, but who will take care of the boys?” I shouted out. The ghost husband demanded my demise regardless and so I fell and smashed and died. Then I followed the boys around as they grew up, raised by random camp counselors.

When I awoke and relayed the dream to The Hunky Hubby, he reassured me that if I ever accidentally pushed him off a rickety balcony to his death, that he would definitely want me not to leap to my doom, but to stay around and raise the boys. Phew! That is good to know, right?

So…what is your craziest dream? And do you think it reveals the insanity within or helps you to be more sane when you are actually awake?