Skip to content
Harrowing/Heartwarming Parent Moment of the Week
May 29, 2016 Kristen 0 Comments

Well…Leia got into the spice cabinet this week and made off with a bag of chocolate chips. I found her holed up at the top of the stairs with her snout buried deep, snorking down tasty bits of chocolate as fast as she could before I came and stole her treasure.

Sweet Boy#3 had his Daddy day at the pump track this week and he loved it so much that we took all the boys after church. The pump track is a bumpy asphalt area for bikes and skateboards and scooters and things that is very fun. The only trouble, sometimes you crash with another rider. Sweet Boy#2 had just such a crash. He managed to avoid landing on his own bike or any people, but he hit the other child’s handlebars square into his ribs and came away with quite a bad scrape. Poor guy was really in a lot of pain, but he told me that he wants to go back for his Daddy Day next week! I was so proud of him.

After I was gone for a whole weekend attending the writer’s conference, Leia was a bit clingy, even going so far as to sleep on the end of our bed to keep an eye on me. Normally she is too hot for beds. When I started the car to take to boys to the bus she would not be left behind. She leaped into my lap and wormed her way into the passenger seat between me and the steering wheel. It was quite a feat and left me impressed with her loyalty…even if she still puts her paws on the counter to nab the butter dish.

Princess Leia proved her bravery this week, much to the boys’ delight. They always like to hear the stories of her facing rogue hay bales or scary “Drive Slowly” signs. So, The Hunky Hubby was taking our puppy princess for a walk in the forest, a place that is home to any number of fearsome predators, such as bears, cougar, squirrels with big pointy teeth…and he felt the need to burp. The Hunky Hubby proceeded to expel a large and impressive belch little knowing the terror that it would bring. Leia, upon hearing the burp, burst into frantic flight down the path, running for her life from whatever terrible beast had growled at her. The Hunky Hubby did finally catch her and reassure her that he would protect her from the wilderness and any bodily noises that might attack. 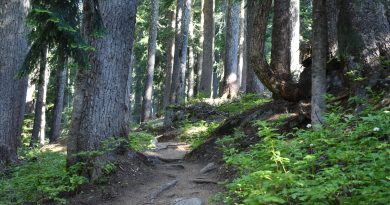