I took Leia down the stairs and looked away for a moment. I heard a vigorous crunching sound, like she was snorking down dog food. We do not keep dog food on the stairs. Sweet Boy#2 had left the package we sent him at camp on the stairs. Inside were a number of old, picked through lemon heads. Leia crunched them down like a furry little shark. I confiscated the lemonheads and took her outside. On the way back she dove under a box that The Hunky Hubby was using to sort through old books in his office. One lone lemonhead and she could smell it! Later, Leia found the confiscated lemonheads again. How had they been resurrected? The boys had been eating them of course! I buried the twice-slobbered candies deeply in the trash. Hopefully neither boy nor pup will discover their resting place.

Sweet Boy#2’s new glasses arrive. I’ve super glued the old ones 3 times. As I drove up with the new glasses I noticed the boys wrestling on the grass. Sweet Boy#2 sans glasses.

“Where are your glasses?”

Momma–“Where are the glasses?” I ask the other boy.

Finally the glasses are found, cracked, one lens lost forever. Thank you Lord that the new ones finally came!

Since our clothes dryer was on the fritz, I hung a load of the boys clothes on the line. Later, 3 boys rushed through the house. They were shouting and throwing something at one another. Their missiles? Handfuls of wet undies. Unfortunately the battle began outside and so the recently clean underthings were now covered in grass and dirt. But apparently they were incredibly fun to throw. 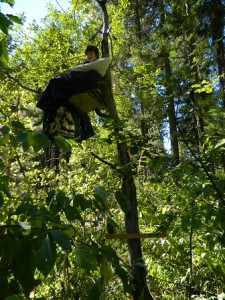 The boys were bored. So I gave them each a plastic baggy full of nails and a hammer and sent them outside. They were happy for a long time. Then they came in for pillows and blankets.

Momma–“Do you have a safe place for those where they will not get dirty, like on the grassy lawn.” 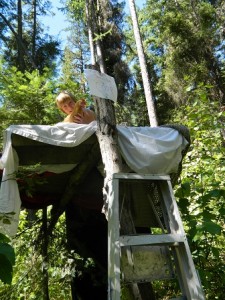 I later ventured forth to see what my offspring had constructed and found some pretty impressive tree forts, populated by boys, and chickens! 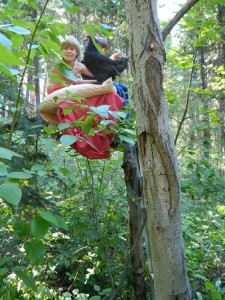 Momma–“Chickens are not clean. There are chickens sitting on your pillows and blankets!”

Boy Children–“Of course chickens are clean and the blankets are high above the dirt.” 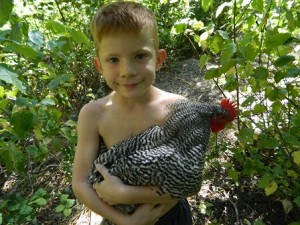 At least I have some entertaining pictures to show you, that is something. . . right? 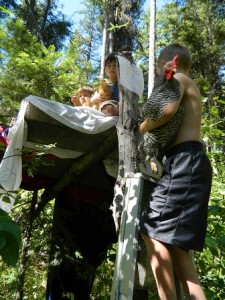 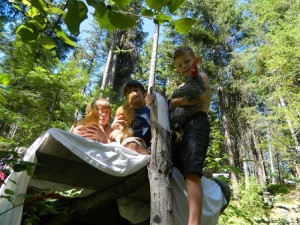 6 thoughts on “The Harrowing/Heartwarming Parent Moment of the Week”