Skip to content
Harrowing/Heartwarming Parent Moment of the Week
June 5, 2015May 30, 2015 Kristen 0 Comments

Oh, how the boys love their chickens!

This week saw the long-awaited return of our pet chickens. They have been residing at the cousin’s house since our yard had to be dug through with a backhoe in order to install the new bathroom in the mountain panther cabin at camp. But the digging is finished and filled in and so our yard was repaired. Paintball, King, Puffis, and Ewok have returned to our home. The boys were really missing them. Now they can run out to the coup to snuggle them in the morning before school and watch all of their little antics as they hunt for bugs in the yard. Painty has been escaping and sure enough, when we brought her back she hightailed it out of the yard. But how was she getting out? Finally, after returning her several times, the Hunky Hubby set himself up by the window to spy on her. I ran out to the forest where she was clucking happily and grabbed our wandering hen. I stuck her back in the yard and the Hunky Hubby kept quiet and watched. Painty waddled over to the fence by a small aspen tree. Then she stopped, looked around, fluffed up her feathers, pecked at the dirt a little, and suddenly…she bolted through the fence and away. There was a small hole in the fence, hidden by a convenient bush. When The Hunky Hubby repaired the hole, Painty zipped after him and watched, she appeared quite put out. Our hens have stayed inside the fence ever since. But what amazes me is Paintball’s stealth. Who would have known that a chicken could be so sneaky? She very clearly looked about to make sure that one of us did not see her and then pretended to be interested in nothing more than bugs and fluffing her feathers. When she made her bolt for freedom it was so carefully planned out. What a funny girl. We are so happy to have our chickens back with us again.

Later, the boys decided to bring up a rooster that they have been taming down at the cousins. Rusty (formerly known as Betty, we thought he was a hen) is a pretty boy and really quite tame. He is however, very loud and we might be taking him back. But he does enjoy the boys. The boys were playing a board game with The Hunky Hubby and they opened the window down on the landing of our stairs to bring in a cool evening breeze. Rusty promptly jumped up into the windowsill to say hi. I wanted him back in the yard and the boys wanted him in the house. We arrived at a compromise. He could sit in the windowsill and be petted as long as he did not jump down into the house or poop anywhere. The boys made sure that his tail section was outside the window and proceeded to give him loves and pats. Rusty was pleased with this arrangement. In fact, it was no time before Paintball joined him in the windowsill. Then King flapped up too. Amazingly, the chickens did not break my rule. All three of them stayed on the windowsill. When the boys were done petting them they did not return to the yard. It was starting to get dark and so all three chickens hunkered down and roosted on the windowsill where they could hear the boys playing with the Hunky Hubby. They slept there, three fluffy balls of feathers, until it was time for the boys to go to bed. I can only presume that they enjoyed roosting somewhere that enabled them to be part of our family evening. I never expected this of chickens. The boys of course, have expected great things from them all along. 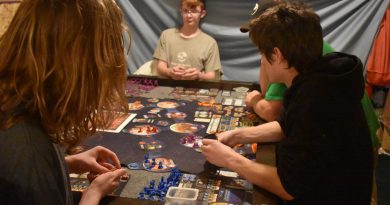