Sweet Boy#2–Gives self a bloody nose practicing for swim lessons in the tub. He has trouble putting his face in the water and so I encourage him to plunge his head beneath the tub waters three times per bath. He had improved vastly and plunged so enthusiastically that he bashed his nose on the bottom!

Sweet Boy#3–Pours a cup full of pee on Sweet Boy#2’s dresser and a large stuffed dog that The Hunky Hubby bought me while we were dating. How does one acquire a cup of pee? Just don’t ask…please.

The Hunky Hubby starts a new tradition. Last day of school game night. Wherein all school age boys get to stay up late and play an actual board game far into the night with Daddy. Sweet Boy#1 got to play a 3hour game with Daddy and two of the big boys from downstairs. He even went to bed later than I did. It goes without saying that the non-school-age-boys were furiously jealous. Sweet Boy#1 chose to be the fierce lady ranger character (because she had two swords instead of one). I was actually quite amazed with his grasp of such a complicated board game: Castle Ravencroft. He caught on faster than I would have and read his own game cards, not even stumbling over the word “adjacent” and being able to give us a definition without a pause or blink. He’s growing up, and becoming a board gamer…Ahhhhh!

But the winner this week–Sweet Boy#1–Has guests over, his best buddy and two younger siblings. They were having a blast, three kids on each upper bunk launching things across the chasm at each other, when Sweet Boy#1 attempts to descend the ladder, slips on the third rung up, plummets down and bashes his head on the ladder of his brother’s bunk. The Hunky Hubby rushes in to find shouting friends, a crying boy holding his head, and blood everywhere. One of those horrible parent moments…how bad is it. I apply pressure to the wound until he calms down and finally the truth is revealed, it is an energetically bleeding 1/4th inch cut. Much relief, Dr. says to keep it clean…but now…how to bandage it? 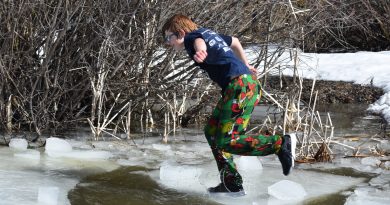 One thought on “The Harrowing/Heartwarming Parent Moment of the Week”