The church has gone out of it’s way to let us know that it is Pro-man. We in the church are careful to give men respect and acknowledge their God given talents in a world that would rather laugh at them and call them obsolete. And this is good, God made men and women for His own reasons and I get that. But I’ve noticed that we in the church don’t seem to be very Pro-Boy.

I have three boys and after almost eight years of this mom thing I am so comfortable with the general boyness of our household that I sometimes forget that the rest of the world doesn’t always “get” boys. I’ve heard educators explain that our school system was actually designed with girls in mind. I’ve even sat through meetings in which people have waxed eloquent upon the value of teaching children to sit in church.

The spiritual value of sitting? We want these little ones to grow into godly warriors who are strong and capable of stepping into a fallen world and loving where it is hard to love and fighting when it would be easier to give up and the best training we can give them when they are at their most impressionable is how to sit still?

I did children’s church the other day. I had an eager and well meaning little girl helper with me. She is great, but from a house full of girls. “They can hear you running down in the nursery Miss Kristen.” I stare at her…”So? Are the younger children having noise enduced seizures?” They weren’t. And so we went on. Later after the Bible lesson we were counting out change that had been gathered to feed orphans in other countries. Most kids have an attention span of about 15 minutes. One of the little boys in the class does well to make it for 5. He had already run around, colored, sang, done a Bible story, read out of a book, and counted some $. At this point he was quietly rolling around in a circle on the floor. My helper hissed to get my attention and pointed at the culprit. I looked at him…quiet, not bothering anyone. I asked if he was alright, he was. “So?” I asked her. I think she wanted him to be sitting in the circle with the other children counting coins. He’d already done that. Rolling around on the floor quietly wasn’t hurting anyone, but I suppose it isn’t what people are used to in a house of girls or even a house with one girl and one boy. But a house with all boys, so normal it’s mundane. Everyone knows that men are different than woman, but why do we keep forgetting that boys are different than girls? 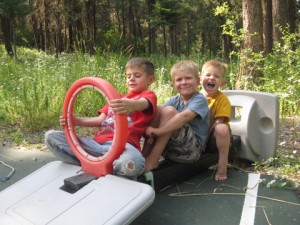 It just makes me wonder. With all of this concern over sitting and quiet and listening…are we teaching our boys to become the strong men of God, the men of action that we claim that we value in the church? And if not…what should we be teaching to prepare them for that?